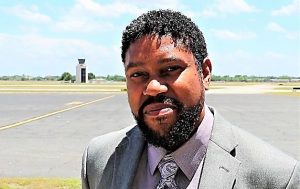 Greater Orlando Aviation Authority Director of General Aviation, Cyrus Callum, has been recognized by the Federal Aviation Administration (FAA) as the 2019 General Aviation Manager of the Year for the Southern Region. The annual Airport Safety Award winners were announced today during the first day of the FAA Southern Region Airports Conference, which is being held virtually this year. The awards recognize excellence in airports and airport managers throughout the Southern Region. As General Aviation Airport Manager of the year, Mr. Callum was deemed to have attained FAA benchmarks for exceptional aviation leadership, working tirelessly to promote the aviation industry and striving to achieve efficiencies and improving productivity within his organization.
Callum is responsible for day-to-day operations and strategic vision at ORL, as well as oversight for all its
Commercial Properties. He has served as Chair on the American Association of Airport Executive’s Board of
Examiners and has been directly involved in developing over 65 Accredited Airport Executives nationally. He
is an Accredited Airport Executive and an Airport Certified Employee in Operations. He also holds a Private
Pilots Certificate.
“The Authority is proud of Mr. Callum’s many contributions to Orlando Executive Airport, the Central Florida
community and the General Aviation industry,” said Phil Brown, Greater Orlando Aviation Authority CEO.
“We are gratified that the FAA has recognized his achievements and leadership qualities and look forward to
his continued positive influence at both the local and national levels.”
The FAA Southern Region Airports Division gives these awards to commend recipients for their hard work,
diligence, and devoted efforts in improving airport safety. The Southern Region includes airports in Florida,
Alabama, Georgia, Kentucky, Mississippi, North Carolina, Tennessee, South Carolina, Puerto Rico and the
U.S. Virgin Islands.
Orlando Executive Airport (ORL) is the primary general aviation airport located in the heart of the city.
Situated on 1,000 acres near downtown Orlando, ORL is the designated reliever airport for Orlando
International Airport. One of the busiest general aviation airports in the country, Executive can handle aircraft
from helicopters to single engine planes to the largest corporate jets.